Development Officer Dennis Falk joined JBS December 1, 1964, after reading the book, “None Dare Call It Treason,” by John A. Stormer.  Dennis also attended chapter meetings for 6 months before joining.  He retired from The Seattle Police Departments in August 1986.  He began working for JBS as the Colorado Coordinator in November 1995.  Dennis is the National Development Officer for Alaska, Hawaii, Colorado, Idaho, Montana, Oregon, Washington and Wyoming.

Dennis and his wife Sharon live at Gig Harbor, Washington.

Radio Interviews, Lots of Them

This week has been one busy week for JBS spokespersons.

Today, Tom DeWeese of the American Policy Center and JBS spokesperson on Agenda 21 will be on The Dave Merlino Show (640 WGST) at 11:35 a.m. to about noon (EST). They will be discussing Agenda 21. The Dave Merlino Show is based out of Atlanta, GA. If you would like to listen live, please click here. There is a “listen live” button in the top left corner.

Tomorrow morning  FreedomProject Education Academic Director Dr. Duke Pesta will be on Second Opinion with Don Griffin from about 7:05 a.m. to 7:30 a.m. (CST).  They will be discussing FreedomProject Eduation.  Second Opinion (KJSL 630 AM) is based out of St. Louis, Missouri.   If you would like to listen live, please go to http://www.truthtalk630.com/.  There is a “listen live” button in the top, right corner.

This morning FreedomProject Education Executive Director Alan Scholl will be on Second Opinion with Don Griffin from about 7:35 a.m. to 8:80 a.m. (CST).  They discussed public education vs. online education.  Second Opinion (KJSL 630 AM) is based out of St. Louis, Missouri.

On Tuesday morning Jim Fitzgerald JBS National Field Director was on Second Opinion with Don Griffin from about 7:05 a.m. to 7:30 a.m. (CST).  They discussed the Support Your Local Police (SYLP) campaign.

If you would like to find out when more of our JBS spokespeople are on the radio, please go to the JBS calendar on our website.

Jeff LeClaire has been working for JBS for over ten years and has been the CFO since October 2001.  Jeff truly enjoys golfing and all of us here at headquarters know it, and he is definitely a good person to get some golf tips from!  His lowest score is an 80 on a par 73.  He has been one over par on nine holes many times, but always seems to fall apart on the other nine.

Jeff ballroom dances usually once a week for both pleasure and exercise, but it’s more exercise than pleasure!   Occasionally he’ll help his dance partner teach her dance class or teach the class if she is out of town.  They occasionally put on dance demonstrations for nursing homes or assisted living complexes.  Jeff also play the guitar, sings, and occasionally writes music.  He sings in his church choir on a regular basis as he enjoys music which is a passion in his life. He loves attending Broadway musicals.  He’s been fortunate to see a number of them while his son was attending a performing arts school in New York City.

He has three children aged 35, 30, and 23.  He also has two grandchildren; a grandson(10) and a granddaughter (14 months).  He really enjoys spending time with both of them as they both live within 15 minutes from his home.  Jeff’s youngest son lives in Hollywood and is pursuing an entertainment career.  He will be touring throughout the country with the Broadway musical “The Book of Mormon” starting in July for two years.  He’s pursuing something that Jeff would have liked to do, but was too conservative and instead became an accountant to pay the bills.  To pay the bills he also prepares tax returns as a CPA which he has done for over 30 years.

FUN FACT: Jeff has a cat as a pet which he took in as a stray as he needed a good home.  They’ve learned to adjust to each other over the years as Jeff wasn’t much of a cat fancier.  His preference is a dog but he’s not home enough to take care of one so either it was a cat or an aquarium with fish.  A low maintenance pet works well for him.

For those of us who work here at headquarters we had quite a shock when we left for lunch today.  The New American Magazine’s building, which is right next door and connected underground, is missing something… the conference room window!  Sometimes, even in winter when its only 16 degrees outside, there comes unexpected construction.  Hopefully TNA will have a window tomorrow when the weather is supposed to be even colder!

Development Officer Bill Cherry will celebrate his 44th year with JBS this year. Bill started working for the society in 1968 as a JBS Coordinator for Oklahoma. In 1979 he was made the Major Coordinator for the southeast United States and then moved to Georgia. Bill became a member of the development staff in 1992 and covered 10 states for JBS, where he still serves today.

Bill attended Texas Tech in Lubbock, Texas and SMU in Dallas where he completed studies in Advanced Traffic And Transportation. After college he worked for the Texas Pacific Railway as a Mgt. Trainee before working for the Society.

He has been an avid runner for the past 40 years, running daily, and during the past ten years competed as a nationally rank age group competitor in both duathlons and triathlons. Bill loves to read, bike, and climb mountains. During the past 18 months he has been participating in a weekly radio talk show on a Fox talk show station in Midland, Texas where he discusses The John Birch Society and the issues facing us today.

FUN FACT: Bill and his wife collect wine and he loves to hold wine tasting events for friends over the holidays and for special occasions. Most of all, he enjoys his local Church activities and telling new prospects about The John Birch Society.

Bill would like to say: Freedom has an address! http://www.jbs.org

January is a really special month here at JBS headquarters!  We have had 6 birthdays so far this month and there are more to come! 🙂  We like birthdays here at that office because whenever there is a birthday, its a reason to celebrate!  On Monday Jeff LeClaire brought in fresh fruit for the office to munch on.  Briana Morse, JBS webmaster, also showed off her baking skills by making a two-layer chocolate cake for the other birthdays, which was DELICIOUS!

By now everyone has heard the results of the Iowa Caucus. Santorum losing to Romney by ± 8 votes, Michelle Bachmann dropping out, Ron Paul coming in third, on top of CNN interviewing a soldier, then cutting him off. (If you haven’t seen that, click here) 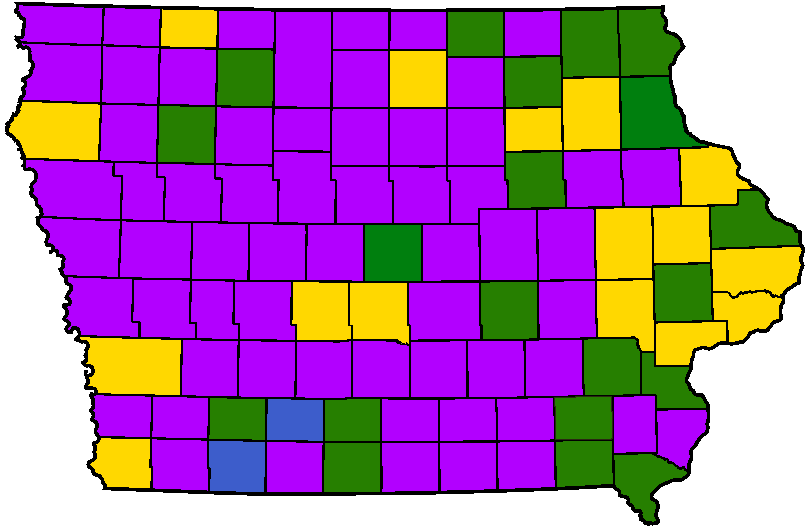 It was interesting to see Romney win, because from the county map of Iowa, it looks like Santorum should have had it. Some people have called for a recount, and some people think the votes weren’t accurately presented. What do you think?
Santorum’s own nephew said he won’t vote for his uncle, though he loves him (read here).  Will Ron Paul run as an independent if he doesn’t get the Republican nomination?

Today is a big day for Iowa, Michelle Bachmann, Ron Paul, Mitt Romney, Newt Gingrich, and Rick Perry. It’s the Iowa caucus. People may wonder why the Iowa caucus is such a big deal. Well, it’s important because it’s the first of the election year, and also may be an indicator of who the Republican candidate is going to be for the 2012 Presidential election.

A little about Iowa:

It has a population of a little over three million people.

It is mainly an agricultural state.

The capital is Des Moines.

Today, the entire country is looking to Iowa to see the results of the caucus.

Check back with us tomorrow to see our thoughts on the results of the caucus.