24 Constitutional Questions Every American Should be Able to Answer

September 17 is designated Constitution Day in recognition of the anniversary of the signing of the Constitution. How many of these quiz questions can you answer?

How did you do? For a refresher, read the Constitution and watch Overview of America.

The Fight for Our Country

Previously having discussed the fundamental properties which different systems of government are based on, today’s topic will primarily be concerned with the potential of The John Birch Society for preserving our republic.

The John Birch Society (JBS) is dedicated to restoring and preserving freedom in The United States of America by inspiring Americans to work for less government, more responsibility, and – with God’s help – a better world.  This nationally recognized organization was founded during a two-day meeting in Indianapolis, Indiana.  During that meeting in December of 1958, Robert Welch proposed a plan to counteract the rising attempts of economic and political control over our country.  The organization’s foundation can be thoroughly studied by reading The Blue Book of the JBS. Throughout this book, Robert Welch formulates a brilliant course of action, breaking it down step by step, in order to protect our nation.

Within The Blue Book, you will find ten steps proposing the procedure of exposing the truth through extending the message.  These steps vary in activity.

One step consists of publishing a magazine with the idea to help keep conservative periodicals in circulation and offering the people an actual source of news articles; while another is promoting the JBS through the radio and extending our message with the use of technology.  In an attempt to widen the audience, The John Birch Society would not only offer its staff to be guests on radio shows, but also provide speaking tours throughout the country, focusing predominately on current affairs and educating audiences on constitutional solutions.

The John Birch Society would also have numerous campaigns and action alerts offering activists an energizing way of exposing the truth.  Robert Welch saw the successes other groups had with front groups.  As a result, he set up ad hoc committees in order to be more effective in spreading the message.  Letter –writing campaigns were seen as a resourceful way to contact legislators and would become an important tool.  With field staff inspiring volunteers to be constantly contacting legislators and opinion molders, the officials would constantly be reminded of the problem at hand.  Other steps would include developing connections internationally to not only expose the corruption within the U.S., but to also see that the corruption does not expand globally.  This would include exposing corrupt politicians in the U.S., thus awakening the American people as well as insuring their various civil responsibilities.

While the information written above does not even begin to reveal the depths of our organization, those ten steps written in The Blue Book are without a doubt the foundation from which we proudly function.  For over 50 years, The John Birch Society has steadily upheld its mission and philosophies.  Without any patience for corruption, our organization has remained true to its intentions.

The headquarters in Appleton, Wisconsin stands as a wonderful think tank for the many publications and ideas the organization continues to produce.  Whether meetings are held for developing campaigns, legislative action alerts are being researched and written, the many news articles for The New American magazine are being edited and posted, or support materials are being developed for field staff and membership, the passion each staff member has for the cause of freedom is evident from the high quality of the work being produced, as we work for less government, more responsibility, and – with God’s help- a better world. 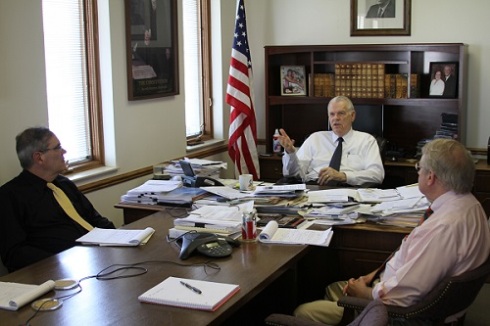 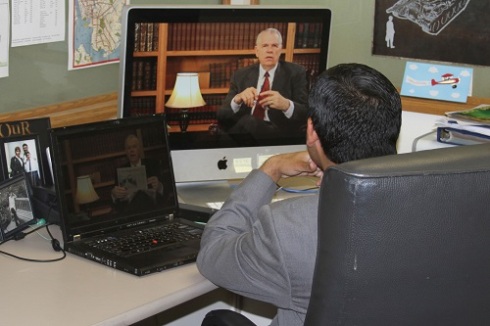 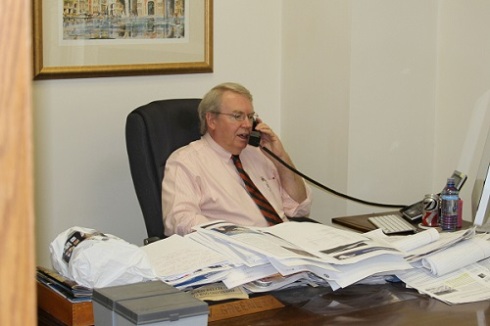 Larry Greenley, Director of Missions, on the phone discussing an action alert.

If you’re concerned about the future of America and preserving what our founders gave to us, can we count on your help?