COOL and the WTO

Shirts, suits, dresses, undergarments, and numerous other items we purchase carry a little tag that tells where they were produced. “Made in China” appears on many. If not China, then Vietnam, Bangladesh, Japan, Taiwan, Pakistan, or some other foreign nation. 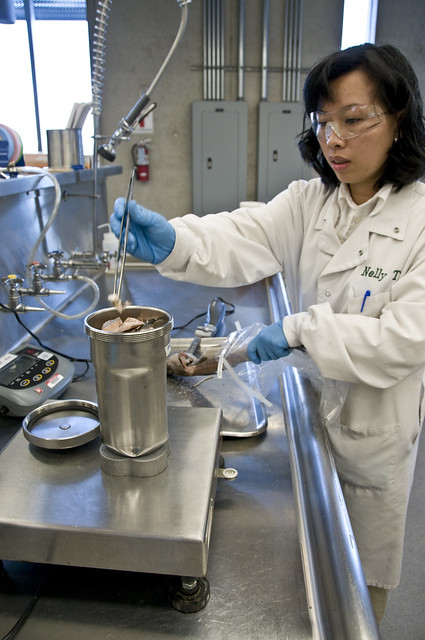 An FDA microbiologist mixes seafood samples with an enrichment broth to test for microorganisms. (Image from US FDA Flickr.)

Clothing, of course, is not the only category of foreign-made products filling our stores. Many of the automobiles, scooters, tools, bicycles, electronics, and more are also foreign made. Sometimes, finding a particular product not imported presents an unsolvable problem, frequently great enough to have many Americans simply give up and settle for foreign-made goods.

What about food? In 2002, Congress enacted a law that came to be known as COOL (Country of Origin Labeling). It required retailers to provide country of origin information for beef, pork, and lamb. In 2008, Congress expanded that requirement to include fresh fruits, nuts, and vegetables. But in late 2015, Congress repealed COOL as part of the omnibus budget bill. There is no longer any requirement for labeling the origin of what we eat.

Five months after the cancellation of COOL, a new report tells us that 47 million pounds of frozen chicken and meat products mixed with vegetables had to be recalled because of worries about listeria monocytogenes. Consuming them could cause listeriosis, an infection that can lead to fever, muscle aches, headaches, confusion, loss of balance, diarrhea and more. The products being recalled carry such brand names as Simmering Samurai, Tai Pei, InnovASIAN, Yakitori, Casa Solano Southwest, etc. They are not made in America.

The recall of these products came out of the U.S. Department of Agriculture and the U.S. Food and Drug Administration. It turns out that there’s no need for COOL if these agencies are doing their jobs. In fact, reliance on them and other U.S. safeguards already in place is what led the majority in Congress to repeal COOL as an unnecessary and costly requirement. The vote to repeal was 300 to 131 in the House.

But there’s another reason why Congress voted to cancel COOL. Canadian and Mexican meat producers, both affected by COOL’s past requirements, complained to the World Trade Organization (WTO). That UN agency has four times ruled against the United States and our COOL mandate. Our two neighboring nations were given authority by WTO to impose tariffs totaling several against the U.S.

Here we have the United Nations making decisions about the food we Americans eat. We won’t know if the beef we consume came from Canada, where mad-cow disease had been detected a few years back, or from Mexico whose cleanliness and butchering processes don’t match requirements imposed by USDA and FDA.

But let’s not give these agencies any constitutional legitimacy. Since these powers have not been delegated to the federal government according to the Constitution, the states reserve the power to make these decisions — and definitely not the UN. So having the United Nations making decisions regarding our food supply is a very unsettling development. If the WTO can force its will regarding food, it has gained a truly significant power. This situation brings to mind the attitude of one of the 20th century’s worst tyrants. As leader of the USSR, Joseph Stalin is reputed to have said that controlling the people’s food is the way to gain control of their nation. Enter the Holodomor.

The main point of these comments, therefore, isn’t so much about the food we consume. It’s much more about whether we will always have food to eat. Considering the power already possessed by the WTO presents another excellent reason to break away from the United Nations.

Say No to the North American Union

Say No to the North American Union
by JBS President John F. McManus

The North American Free Trade Agreement (NAFTA) won congressional approval in late 1993. Signed by then-President Clinton, the pact, has contributed to one million manufacturing jobs lost and many hundreds of closed factories.

But the loss of jobs and factories hasn’t been the only casualty. When NAFTA was being considered, both Henry Kissinger and David Rockefeller, two eager proponents of eventual world government, made clear in their published statements that the pact was only a stepping stone toward the larger goal of uniting Canada, the United States, and Mexico into a North American Union (NAU). And creation of a formal NAU would be a step toward the “new world order” that each desires. Effective work by The John Birch Society and some allies prevented realization of the plan to sacrifice national independence in favor of the NAU.

But the enemies of national independence never sleep. At a recent gathering of the Texas-Chihuahua-New Mexico Regional Economic Competitiveness Forum held in El Paso, Texas, Congressmen Beto O’Rourke, Joaquin Castro and Henry Cuellar – all Democrats from Texas – stated their hopes to create more ties with Mexico. And Congressman Bill Owens (D-N.Y.) who represents a district bordering Canada added his hope that a similar expansion of ties can be made with Canada.

Mr. Cuellar pointed to energy production in the three North American countries. He wants to “put Mexico, Canada, and the U.S. [into a relationship] that will be the new Middle East of the world.” Energy production, of course, can continue and grow without sacrificing the independence of each of the countries. Simply stated, there is no need to give up national sovereignty in order to produce energy.

A report about the El Paso meeting provided by Newspaper Tree stated: “But with regional economies and markets across the planet becoming increasingly competitive in a globalizing and urbanizing world, the notion of building upon a stronger North America in a post-NAFTA hemisphere was clearly on the lawmakers’ minds.”

The American people must be made aware that the NAFTA pact, as costly as it was regarding jobs, also contained in its 1,700 pages numerous additional entanglements such as NAFTA judicial panels whose decisions supersede the rulings of our nation’s state and federal courts. There can be little doubt that the intention of the globalists includes having a newly created North American Union crush independence here in the same manner that it has been crushed for 28 European nations by the European Union. Members of Congress must be told by constituents that keeping our nation away from entanglements such as the proposed NAU is imperative.

For more on the agenda behind free trade agreements, read “International Merger by Foreign Entanglements” by JBS CEO Arthur Thompson. Check out a review of it here.