Only recently, the Texas legislature succeeded in imposing a brake on the practice of abortion within its boundaries. Pro-abortion partisans sued to overturn the law, but the federal Fifth Circuit Court of Appeals upheld it. Unsurprisingly, the Appeals Court ruling has been challenged and will be decided by the Supreme Court where only eight members remain as a result of Justice Antonin Scalia’s passing. Both sides have already presented their arguments to the high court and a verdict on Whole Women’s Health v. Hellerstadt will be handed down before the summer recess begins. 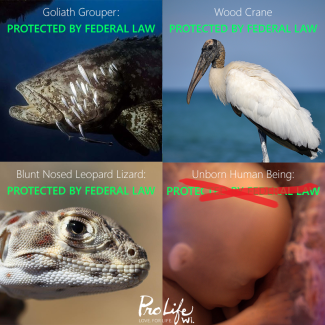 As ProLife Wisconsin asks, “What’s wrong with this picture?”

Looking at the current makeup of the Supreme Court, it is safe to assume that four justices (Ginsburg, Breyer, Kagan, and Sotomayor) will favor reversing the Fifth Circuit’s support for the Texas law. It also seems safe to conclude that three justices (Thomas, Alito, and Roberts) will uphold it. That leaves the eighth member, Justice Anthony Kennedy, with the deciding vote. If he sides with the three presumed upholders, the Court will have registered a non-decision and the Fifth Circuit decision will remain in force. If he joins the four and favors reversal of the Texas law, the abortion industry will have been given a new green light to continue its widespread taking of life in the womb.

The Texas law under scrutiny imposes regulations on abortion clinics and the purveyors of the practice. It says that abortionists must have hospital medical staff credentials and admitting privileges within 30 miles of their clinic. And it insists that the abortion providers must be equipped to provide the same medical treatments available as the many hospitals and surgery centers throughout the state.

Almost all of the Texas abortion clinics cannot meet those two requirements. Consequently, more than half of the 40 abortion clinics in the state have already closed their doors. More are expected to shut down because they are either not close enough to a hospital that has awarded their people admitting privileges, or they don’t have medical staff on hand to deal with complications arising from taking a fetus from a woman’s womb.

The Association of American Physicians and Surgeons (AAPS), an anti-abortion association of doctors frequently at odds with the American Medical Association (AMA), claimed in its amicus brief submitted to the Supreme Court that more than 75 percent of abortions throughout the nation lead to a need for a surgical procedure that most abortion clinics are unable to perform. What these facilities aren’t equipped to provide are the ambulatory surgical procedures routinely performed by hospitals. Women seeking abortions at most of the clinics in Texas have heretofore placed themselves in jeopardy of untreatable complications such as uterine perforation, infection, bleeding, and more.

Speaking for the Obama administration, U.S. Solicitor General Donald Verrilli told the high court’s justices on March 2nd that the Texas law “closes most abortion facilities in the state, puts extreme pressure on the few facilities that remain open, and exponentially increases the obstacles confronting women who seek abortion.” He has thereby correctly yet ruefully summarized the effect of the law. He added that the few remaining Texas clinics still open for abortion were already overloaded and could not meet the demands of women who seek to terminate the life in their wombs.

So the Supreme Court, where laws against abortion were abolished nationwide in the 1973 Roe v. Wade ruling, is facing a severe test. If the court rules 4 to 4, the Texas law will remain in effect and it will apply in all 50 states. Those who believe, as does this writer, that abortion is terribly wrong because it snuffs out an already created life, will be watching for the court’s decision, a ruling that seems to be Justice Anthony Kennedy’s to decide.