Time to Audit the Fed

The Federal Reserve isn’t a government agency. Nor is it a bank in the normal sense of the term. It is a secretly run privately-owned institution that has, for slightly more than 100 years, built enormous power to decide the value of the dollar, set interest rates on borrowing, and create booms and busts affecting virtually all of us. 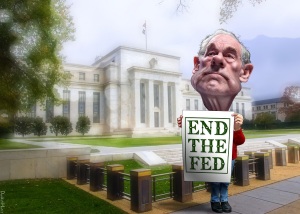 A move to audit the Fed, even to find out who owns it, has been gathering steam in Congress over recent years. In 2014, the House voted 338-92 to conduct an audit of the Fed. In 2016, senators voted 53-44 to perform an audit – not enough to get by the 60-vote threshold needed to avoid a filibuster. As expected in each tally, almost all Republicans cast Yea votes; virtually all Democrats voted Nay. The campaign to force an audit continues.

In April 2017, former Treasury Secretary and prominent Council on Foreign Relations member Robert Rubin signaled his unsurprising opposition to an audit in an Op-Ed piece published by The New York Times. He urged keeping the Fed’s operations secret, away from what he insisted would be political pressures. Fed Chairman Janet Yellen surprised no one when she expressed a similar objection.

The current congressional leaders seeking Fed openness are Rep. Thomas Massie (R-Ky.) and Sen. Rand Paul (R-Ky.).  Massie has stated: “It is time to force the Federal Reserve to operate by the same standards of transparency and accountability to the taxpayers” that should be demanded of all government and semi-government agencies. Rand Paul, following the lead set by his father, a retired member of the House, agrees.

However, President Trump has just signaled a possible opposing view by naming former judge and Wall Street favorite Jerome Powell to succeed Yellen as Fed Chairman early next year. No quiet opponent of any audit, Powell devoted an entire February 9, 2015 speech to attacking any call for an audit. A partisan for Fed-issued money, he has championed federal debt ceiling increases and his pro-Fed stance won President Obama’s nomination to the Federal Reserve Board of Governors in 2011.

Were he alive today, one emphatic supporter of the Fed would be Karl Marx. In his 1848 Communist Manifesto, the father of modern socialism and communism called for “Centralization of credit in the hands of the State, by means of a national bank with State capital and an exclusive monopoly.” In 1913, when the creation of the Fed won congressional approval, its creators went one step deeper into building what Marx urged by making the Fed secret and privately owned. It’s even worse than the state-owned institution Marx called for.

Currently, there is a bill in each house of Congress to have the Fed audited. H.R. 24 introduced by Rep. Massie is gathering co-sponsors in the House. And S.16 is doing likewise in the Senate. All who support openness and honesty in government should be contacting their elected officials to urge support for these measures.

During a Senate recess while he was innocently mowing the lawn in front of his Kentucky home on November 5th, Senator Rand Paul was physically and viciously attacked by his next-door neighbor. Rene Voucher, a known liberal socialist who is a medical doctor, has in the past verbally jousted with Paul, a hard-right conservative. This time, the confrontation wasn’t verbal but physical. Paul’s injuries in the completely unexpected attack included five broken ribs and bruised lungs. He will be sidelined for several months. Boucher was arrested and allowed to go free when he posted a $7,500 bond. He will likely face further punishment.

The pummeling of Rand Paul may have nothing to do with the senator’s call for auditing the Fed. But Boucher has loudly made known his preference for socialized medicine, something Senator Paul vibrantly opposes. What happened in the Bowling Green, Kentucky, neighborhood where the two men reside (Boucher lives alone; Paul lives with his wife and children) may include differing attitudes about the Fed. We don’t know. But we certainly wish Senator Paul a speedy recovery from his injuries. And we look forward to knowing that his S. 16 and Thomas Massie’s H.R. 24 gain passage in the Congress so that the Fed’s unmonitored operations will be finished.

The Fed’s secrecy should certainly be cancelled. It is known, for instance, that the Fed bailed out Greece during that nation’s recent economic crisis. How many similar transactions has the Fed conducted with other countries? The American people have a right to know who owns the Fed, who are all of its beneficiaries, and plenty more about the operations of this Marxist organization.

The Federal Reserve came to life in 1913 through an act of Congress. At the time of its creation, U.S. paper currency (issued by the Treasury Department) stated that all paper money could be redeemed in precious metal. Over the course of several decades, issuance of currency shifted from the Treasury Department to the Federal Reserve and the promise to redeem paper currency for gold or silver disappeared.

Right now, bills have been introduced in Congress calling for the Fed to be audited (Image from Flickr by Pictures of Money, CC by 2.0).

The U.S. dollar, known widely to be “good as gold” when the Fed was born, was worth 100 cents. Today, it’s worth is less than two cents. Where that value went is something the American people have a right to know. But, today, the Fed’s history and its monetary manipulations aren’t well enough known to get answers to many questions about how it operates.

Mostly through the efforts of two men needed attention is being drawn to the Fed’s stranglehold over our nation’s monetary system. The two are G. Edward Griffin, who authored the blockbuster book The Creature From Jekyll Island and Ron Paul, the retired congressman from Texas. The Griffin book traces the history of the Fed from its conception at a secret meeting held at Jekyll Island, Georgia, to its gradual yet, largely hidden acquisition of power over our nation’s economic life.

While serving in Congress, Ron Paul sought for years to have Congress audit the organization. In its more than a century of operation, no such audit has ever been conducted. Though retired, Paul’s efforts to have fellow House members require such a sensible examination continue. And they seem poised to achieve some success.

But still there will be resistance to these credited efforts. Fed Chairman Janet Yellen doesn’t want the Fed audited. She claims a need to have it operate independently with no outside scrutiny. Former Treasury Secretary (1995-1999) and current co-chairman of the elitist Council on Foreign Relations, Robert Rubin also wants the Fed to remain independent. He maintains that politicization of the Fed would be harmful and the choices of those who lead it should not be changed.

A short column such as this one can only touch on the harm done by the Fed. But let us at least point to an article appearing in the January 1993 issue of National Geographic magazine. NG Assistant Editor Peter White visited the Fed and was told by one of its unnamed officials that whenever the Fed buys U.S. Treasury bills (IOUs), it does so with money that “didn’t exist before.” “We created it,” says the Fed official, while admitting freely that there is no limit on such a practice except “the good judgment” of Fed officials.

Fed transactions of this kind are carried out repeatedly. Each new creation of money acquires its value by watering down (stealing!) the worth of all existing money. That happens to be what inflation truly is. Whenever a counterfeiter “creates” money, he is chased and, when caught, suffers punishment for doing what the Fed repeatedly does. If you wonder why prices are rising for homes, autos, groceries, etc., an answer has just been supplied. The price you pay simply reflects the worth of the increasingly valueless money you use.

Right now, bills have been introduced in Congress calling for the Fed to be audited. In the House, H.R. 24 seeks such a goal. In the Senate, S. 16 does likewise. Even though it’s only a first step toward freeing America of the ravages of the Fed, it’s certainly time for such scrutiny.

If you are one of the many Americans who are suffering from the shrinking monetary value of your salary, savings, possessions, etc., contact your congressman and two senators and ask each to support the appropriate Federal Reserve Transparency Act. That’s the formal name for H.R. 24 in the House and S. 16 in the Senate.