At a posh dinner gathering on May 16th, the Leadership Conference on Civil and Human Rights presented its annual Hubert H. Humphrey Civil and Human Rights Award to Planned Parenthood (PP) President Cecile Richards. In the numerous flattering comments extolling Richards’ accomplishments, Leadership Conference bigwigs said the PP mogul was “a nationally respected leader in women’s health and reproductive rights.” That’s a bit like designating Mao Tse-tung, history’s greatest mass murderer, as a premier guardian of life and liberty. PP terminates the life of many thousands each year.

What was the Leadership Conference praising? In its annual report for fiscal 2016, Planned Parenthood indicated it had performed 321,384 abortions in the United States. For this achievement, claimed the conference leaders, PP deserves thanks and congratulations for creating “a healthier and safer world for women….” Of course, half of the infants slaughtered in the womb by the Cecile Richards-led “health care providers” were females. PP didn’t create a “healthier and safer world” for them. The horrifying truth is that roughly 160,000 live female fetuses needed only to be left alone for a matter of weeks in order to become citizens of our free country.

The criminal act of terminating life in the womb costs money. Much of PP’s funding to continue its grisly practice comes from the federal government. During fiscal 2016 ending on June 30, 2017, PP’s annual report noted receiving $543,700,000 from federal “reimbursements and grants.” Which means that a singularly important financier of killing American human beings in the womb is the U.S. government. And all taxpayers, including a large number of anti-abortion citizens, are compelled to finance slaughtering unborn babes. There is no greater outrage being forced on the American people.

The Leadership Conference that chose to honor Cecile Richards is a coalition of liberal and left wing groups born in 1950 with 30 organizations as initial members. Its current list of 200 groups includes the following generally known organizations: AARP, ACLU, AFL-CIO, American Federation of Teachers, B’nai B’rith International, United Auto Workers, League of Woman Voters, NAACP, National Education Association, National Organization for Women, People For the American Way, and YWCA. The complete list of its 200 member organizations appears on the conference’s web site. Undoubtedly, there are opponents of slaughtering in the womb within many of the 200 Leadership Conference groups. Letting these people know that an organization to which they belong is heaping praise on PP’s leader and its featured despicable practice is recommended.

Insisting that abortion is a highly condemnable practice soiling the image of our nation ought to be “shouted from the housetops.” And compelling America’s taxpayers to finance the practice through taxation deserves to be labeled a “criminal act.” A realistic assessment of abortion should unabashedly term it “murder.” And compelling people to finance what they truly abhor is a cardinal practice of tyrannical governing.

During her acceptance speech at the Leadership Conference ceremony, Cecile Richards sought confirmation for what she has been doing by pointing to herself and PP and stating, “Nobody’s free until everyone’s free.” She and all Americans need to understand that babes in the womb slain by Planned Parenthood aren’t free to remain alive until they are born. Therefore, according to her own assessment, nobody else is free. At very least, or until legalized abortion is again deemed a high crime, the federal government should cease funding the murderous organization known as Planned Parenthood.

Yes, there were “legal” abortions being performed in a few states prior to the Supreme Court’s 1973 ruling. States where abortion had been “legalized” were classified by many as outcasts or worse. But once the 7-2 Court decision destroyed all state laws banning the practice, the number of abortions skyrocketed. Since 1973, the lives of more than 57 million infants have been snuffed out. 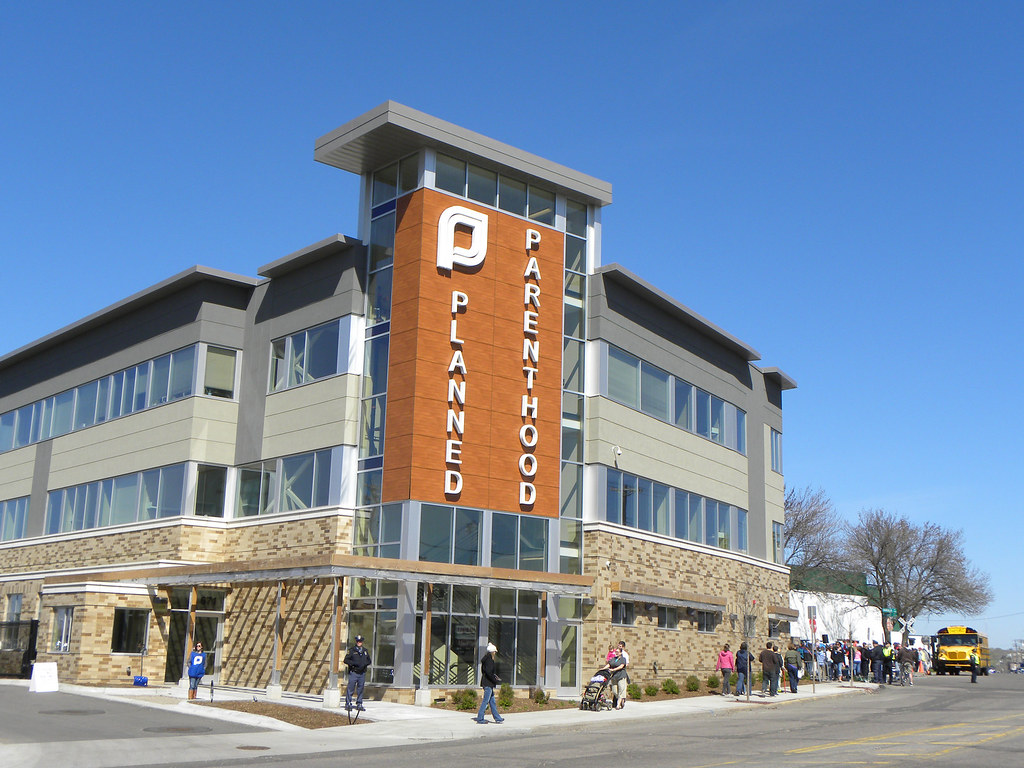 The largest U.S.- based agency committing this crime, with facilities throughout the nation, is Planned Parenthood (Image from Flickr by Fibonacci Blue Some rights reserved).

The largest U.S.- based agency committing this crime, with facilities throughout the nation, is Planned Parenthood. Not only has the highest court in our nation given a green light to these baby killers, Planned Parenthood receives federal funding that fuels such work. In the single year of 2014, for instance, Planned Parenthood received $528 million taken from taxpayers, many of whom intensely abhor the practice. In that year, the number snuffed out in the womb by Planned Parenthood totaled 327,000. These were all live infants needing only a few more weeks of not being molested before they could exist outside their mother’s womb. That Americans allow this to occur, and allow themselves to be taxed to fund it, is a severe indictment of our entire nation.

Defenders of Planned Parenthood like to focus on mammograms and cancer screenings, which they claim to supply. Yes, Planned Parenthood does such beneficial work. But its main effort is abortion. And now, it has been shown that Planned Parenthood harvests healthy organs from aborted infants and sells them for profit. Asked about this at a press conference after video tapings of the organization’s officials containing admissions of such a practice surfaced, White House spokesman Josh Earnest defended Planned Parenthood insisting that the organization has “high ethical standards.” Selling the parts of murdered infants doesn’t merit being included in any real “high ethical standards.” Instead the practice merits being classified as a Hitlerian criminal act.

The Obama White House has been especially chummy with Planned Parenthood’s President Cecile Richards. According to CNS News, she has been welcomed to the White House 39 times during the Obama presidency – including four one-on-one visits with the President, two with his spouse, four with both Obamas, and the rest with a variety of the President’s assistants including Secretary of Health and Human Services Sylvia Burwell. Defending Planned Parenthood, Ms. Burwell pointed to preventive care such as mammograms. The problem is that most of the Planned Parenthood facilities performing abortions don’t have equipment for mammograms.

Kentucky Senator Rand Paul pointed to the $10,000 campaign contribution supplied by Planned Parenthood to presidential candidate Hillary Clinton. The poll-leading Mrs. Clinton states, “I’m proud to stand with Planned Parenthood.” She has to know that this organization was founded by Margaret Sanger who should be known as one of the worst racists that ever claimed to be an American.

Planned Parenthood should not receive a penny of federal aid. Legalization of abortion must be abolished. And Americans must get back to being a place where all living humans, including those living in the womb, are treated as real persons.