Executive Orders, Subject to the People

In a nation where people enjoy freedom, laws are made by a parliament, a congress, or some similar assemblage of elected officials. These lawmakers owe their posts to voters and are, in the main, subject to the people. But, as history has repeatedly shown, the laws in many nations are made by the decrees of a king or dictator who relies on virtually almighty power to rule. 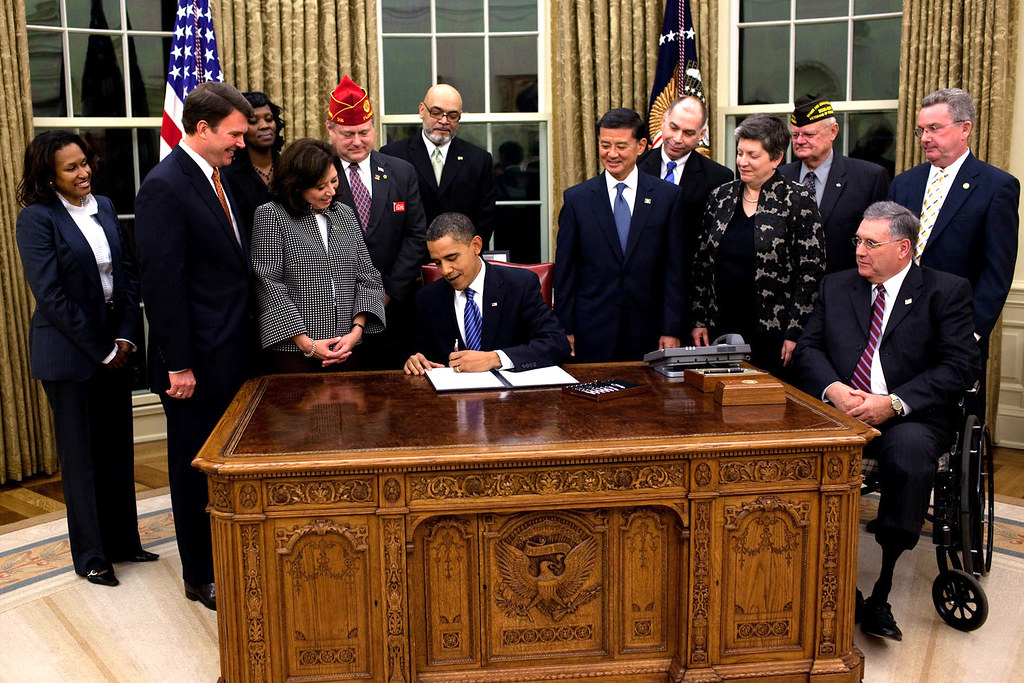 The signing of an executive order on the Employment of Veterans in the Federal Government, (photo by White House Photo Office [Public domain by Pete Souza], via Wikimedia Commons).

America’s Founders knew well the excesses of that kind of power. So they declared themselves independent, fought a war to get out from under a king’s dictates, and won the struggle to be free. The very first clause in the 1787 Constitution they created left all law-making power in the hands of Congress. Under the rules established by the U.S. Constitution, the president is charged with the responsibility, not to make law, but to see that all laws properly enacted would be faithfully executed.

In the performance of his duties, a president can issue executive orders that have the force of law – but only among those who serve under him. A presidential executive order is proper when directed at government employees. While he serves, a president is much like the CEO of a company who certainly has a right to issue orders binding his employees.

In 1793, during his first term in office, George Washington issued an executive order declaring America’s neutrality in the war between France and England. Our first president soon realized that the protests of Madison and Jefferson against his executive mandate were correct. He then asked Congress to issue a law declaring the sought-after neutrality and Congress complied. There were no more presidential misuses of the executive order power for approximately 70 years.

In 1863, President Abraham Lincoln overstepped his authority and issued executive orders that suspended habeas corpus, blockaded southern ports, and emancipated southern slaves. He cited his role as “commander in chief” of the military to do so. Later, following the pattern set by Washington, he asked Congress to amend the Constitution to prohibit all slavery. Which was done. A measure of respect for the limitations on presidential power still existed during that period of history. Then in 1866, the Supreme Court in Ex Parte Milligan explained those limitations as follows:

Fast forward to today. In its first seven years, the Obama administration issued 560 major regulations via executive orders. Each had significant economic or social consequences for the entire nation. His wrongful reliance on the power to issue improper executive orders followed President George W. Bush’s issuance of half the number created by President Obama. As reported by Binyamin Applebaum and Michael D. Shear in the August 28, 2016 issue of the New York Times, the Obama orders aimed, among other targets, to “restructure the nation’s health care and financial industries, limit pollution, bolster workplace protections, and extend equal rights to minorities.” The Times reporters added that Obama’s reliance on executive orders “has imposed billions of dollars in new costs on businesses and consumers.”

Barack Obama has even stated his intention to use “my pen” if Congress doesn’t enact laws he wants. Too often, Congress has caved in and tolerated such completely illicit contempt for the Constitution. This docility of the legislative branch has to stop. No king or all-powerful ruler should be making laws for our nation.

Congress should declare any executive order aimed at the entire population completely null. All presidents should follow the lesson George Washington learned while he served as President. All Americans should become familiar with Article I, Section 1, Clause 1 of the U.S. Constitution where Congress is named as the sole possessor of “All legislative powers.”

3 Comments on “Executive Orders, Subject to the People”