Last January, the Obama administration quietly airlifted $400 million in foreign currency to Iran. An unmarked cargo plane delivered the funds and the completion of the deal just happened to occur on the same day the Tehran regime released four Americans previously imprisoned for a variety of charges. The suspiciously unmarked plane also delivered part of a $1.3 billion payment for Iranian funds held in the U.S. ever since the Iranian hostage crisis of 1979-1981. The transaction certainly smelled like a ransom payment, something President Obama and his press corps have vociferously denied. But the incident brought back memories of the 1979-1981 hostage crisis when America suffered unneeded indignity and unnecessary loss of life. 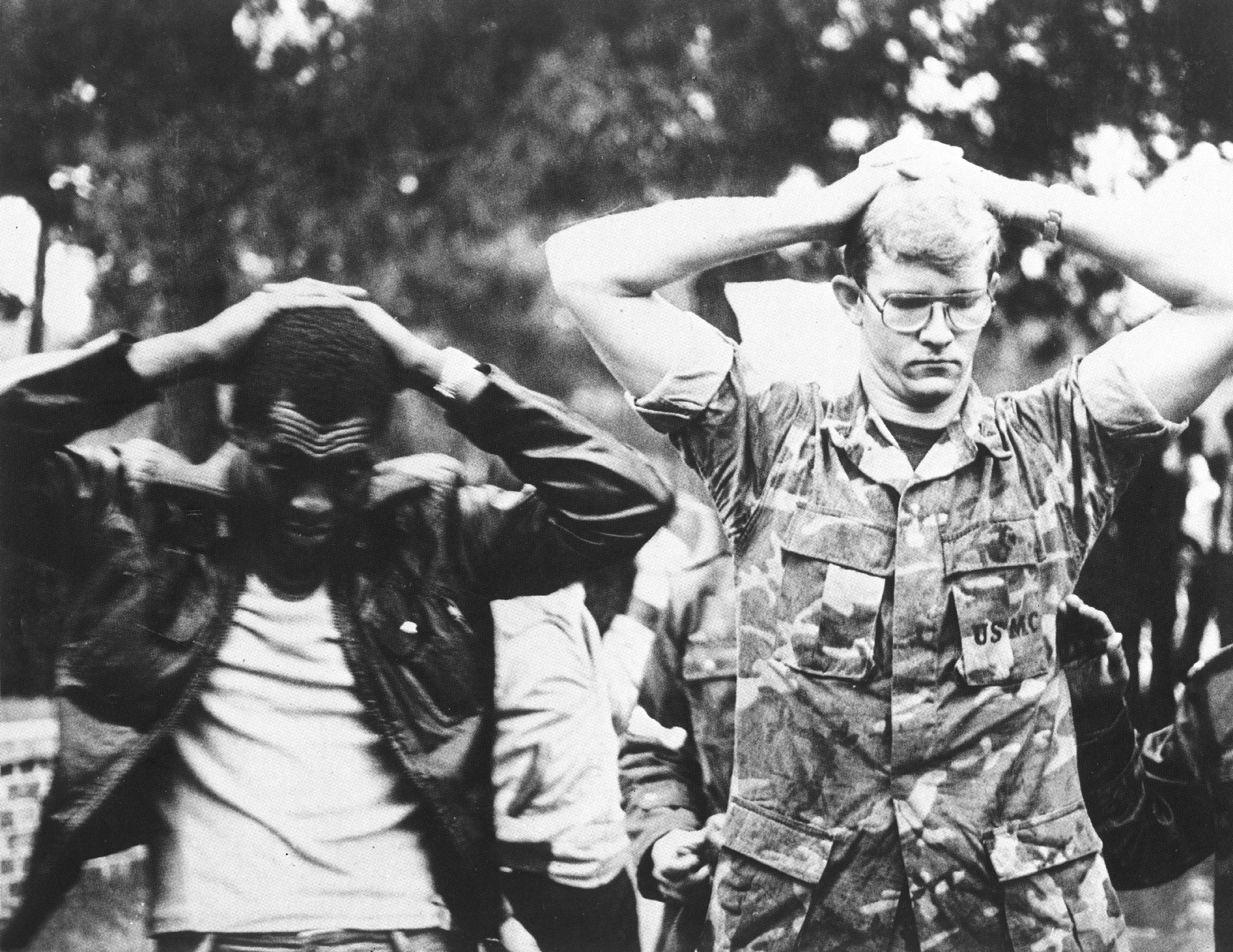 Two American hostages being detained in Iran after the siege of the American embassy, 1979 (image by an unknown author [public domain or CC BY-SA 4.0], via Wikimedia Commons). The CIA organized and directed a coup that helped to keep the pro-American Shah Reza Pahlavi in power in 1953, an entangling alliance that our founders warned us about. Yet, American and British policymakers turned on him in the mid-1970s.

On November 4, 1979, 66 American diplomats and embassy workers were captured when a mob of student demonstrators stormed the U.S. embassy. Hoping to show their solidarity for “oppressed minorities” and Islam’s “special treatment of women,” the leaders of the assault immediately freed 13 women and African-Americans. Another male embassy worker with health problems was released. The remaining 52 were held hostage for 444 days. The Iranian students were egged on by anti-American fervor in the wake of Iran’s ouster of pro-American Shah Reza Pahlavi and the return to the country of anti-American Ayatollah Ruhollah Khomeini. The students then turned over their captives to Iranian authorities while celebrating their success. Many of these hostages endured beatings, solitary confinement and threats of execution. The detainment for most was ghastly.

President Carter meekly denounced the seizure of our embassy and the confinement of U.S. citizens, appealing for their release on humanitarian grounds. Initially, the Iranians intended to hold the embassy and its occupants for only a short time. But Khomeini, now the de facto political leader of his country, found the insult given to the United States a source of pride and a blow at the “Great Satan.” He proclaimed, “This has united our people. Our opponents do not dare act against us.” The response of the Carter administration to the outrage was pitiful.

Something else happened during the early days of this crisis that few recall or wish to mention. Approximately two weeks after the seizure of the embassy, Khomeini announced his intention to withdraw Iran’s millions from New York banks. Only then, not when our embassy was seized and our people imprisoned, did President Carter declare a state of emergency and freeze Iranian assets. The taking of our embassy and the treatment accorded its personnel weren’t reasons enough to merit an emergency declaration. But the threat of sizable withdrawals from the big banks had to be countered.

On April 24, 1980, President Carter sent a pair of helicopters on an ill-fated rescue mission. Flying off U.S. Navy carriers in the Persian Gulf, the copter mission proved to be a complete disaster. The helicopters ran into sand storms and were destroyed. Eight American servicemen and one Iranian civilian died during the botched attempt. And Jimmy Carter’s reelection effort suffered a huge setback. On January 20, 1981, the 52 hostages came home to be greeted by a defeated Jimmy Carter during his last day in office. Though not alone as a reason for his not being reelected, the weakness of America during the hostage crisis certainly figured in the choice of many voters that previous November.

House Foreign Affairs Committee Chairman Ed Royce (R-Calif.) has angrily stated that the delivery of cash to Iran amounted to an Obama cave-in, a ransom payment that America has sworn never to deliver. “Hundreds of millions in the pockets of a terrorist regime means a more dangerous region,” he said while adding, “The Iran nuclear deal was a historic mistake.” He wondered, “What else is the Obama administration hiding?”

Good question. America’s foreign policy has largely remained hidden from its citizens, interfering time and again in the governing of other countries for its own gain. It’s time our foreign policy return to the advice of our founders to regain its former level of prominence and respect around the globe.