← Lindsey Graham: A Leading Political Change Artist
Will There Be a Brokered GOP Convention? →

As president of Mexico from 2000 to 2006, Vicente Fox disappointed both his countrymen and his neighbors in the United States. Concerned Americans were already feeling the effects of the 1994 North American Free Trade Agreement (NAFTA) that spurred the flood of migration into the U.S. It also paved the way for relocation of numerous industries and countless jobs to Mexico after its passage. 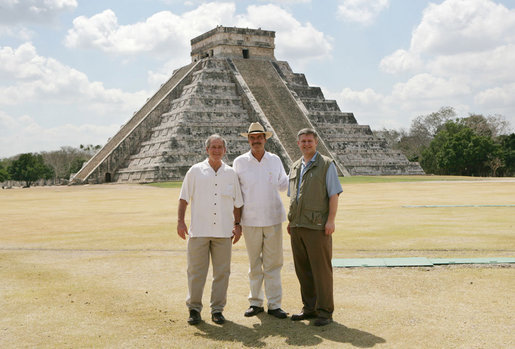 Soon after his surprising election victory that broke a 70-year stranglehold on the Mexican presidency held by the the PRI (Partido Revolucionario Institucional), Fox became Mexico’s leading cheerleader for NAFTA, even, as the Wall Street Journal noted, calling for it to become “something like the European Union.” In 2002, he told an audience in Spain of his goal: “Eventually our long-range objective is to establish … an ensemble of connections and institutions similar to those created by the European Union.”

NAFTA opened the floodgates for U.S. factories to close their doors and head for Mexico’s lower worker pay. Many U.S. workers lost their livelihoods and the bleeding hasn’t stopped. General Motors will soon open a huge automobile production facility in the middle of Mexico. But the harm done to U.S. manufacturing and workers isn’t the only negative aspect of NAFTA because America’s sovereignty is at stake should a Fox-backed plan to merge Canada, the U.S., and Mexico into a North American Union materialize. That would constitute a huge step toward building a Western Hemisphere union similar to the European Union that has already compromised the independence of its 28 member nations.

Based on his statements and performance, it’s easy to classify Vicente Fox as a world government booster. But many in England are now backing a plan to have their nation quit the European Union. Other Europeans are reconsidering their entanglement in the EU because they increasingly realize that the pact they thought was merely a trade agreement has become their de facto ruler. The rush toward a “new world order” has been slowed in Europe but Fox has cheered building it in the Western hemisphere.

It comes as little surprise, therefore, to hear Fox outspokenly injecting himself into current race for the presidency here in America. GOP frontrunner Donald Trump has stirred Fox’s ire with his plan to build a fence along the Mexico-U.S. border and to have Mexico pay for it with tariffs on Mexican goods heading north. Trump has also pointed to the cascade of drugs and crime that entered through the America’s porous southern border.

From his home in south-central Mexico, Fox has brazenly called on Americans to reject Trump. He adds that Hillary Clinton will “save” the U.S. from a “Trumpist nightmare” and that Donald Trump is “making the United States look very bad.”

Trump ought to remind Fox that his own people thought so little of the leadership he gave them that millions fled to the United States.

Foreign leaders are certainly entitled to their opinion regarding candidates for office in other countries. But they ought to keep their choices to themselves. In this instance, however, Vicente Fox’s openly stated choice of Hillary Clinton and his distaste for Donald Trump will likely help swell support for the real estate mogul in his bid for the U.S. presidency.